Community Learns About Local History of the North Woods

On Saturday, July 30th, Economics Professor Robert Jones led a tour through the North Woods that focused on the local history of the Woods.  Seventeen visitors accompanied the professor.  Professor Jones’ tour began on the Red Trail, looped into the Blue Trail, came back on the Red Trail, and ended on the Spirit Trail.  Along the way, he highlighted points of interest of Skidmore’s not-too-distant past.

Visitors were surprised to learn that the present day campus sits atop the vast Woodlawn Estate.  Judge Henry Hilton, a “Tameney Hall” judge from New York City, was the owner of the estate that included a mansion, stables, and various lodges and cottages for his daughters and guests.  Visitors of the tour were captivated by Professor Jones’ stories of old carriage trails that ran through the forest – they were similarly intrigued by the fact that the gravel that coated the carriage trails came from rocks that were blasted to level the terrain for Hilton’s mansion.

Did you know that Judge Hilton owned a marble statute of Hiawatha that currently resides in the Museum of Modern Art in New York City?  Visitors marveled at additional facts about the North Woods: some were surprised to learn that  a Toboggan Sled (built in 1885) used to exist just north of the Fenced Well, not too far from the Glen Mitchell Hotel?  For some, it was hard to acknowledge that this second-growth forest was once filled with tourist attractions and lodges.  Others more readily embraced the Woods as a site that once housed the Saratoga County Fair, complete with a shooting range!  Who knew that rifles and toboggans were all the rage in the 1880’s?

What astonished visitors the most, it seemed, was Professor Jones’ juxtaposition of statistics.  In 1961, before the construction began on the new campus, the North Woods were 260 acres.  Today, in the area that is circumscribed by Maple Avenue Middle School, Skidmore’s campus, and the railroad tracks, the North Woods is only 160 acres.

The shrinkage of the North Woods epitomized the theme of Professor Jones’ tour: the North Woods is, and has always been, dynamic.  The local history paints a portrait of an area that has been full of remarkable changes: from high-end tourist amenities to deciduous trees. 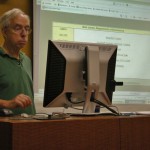 Professor Jones scrolls through a slideshow full of archival photos of the Woodlawn Estate. 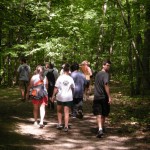 Visitors walk along the Red Trail. 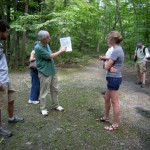 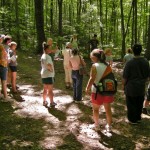 Visitors keep up with Professor Jones as he talks about the network of carriage trails that ran through the North Woods.

This entry was posted in Community Outreach, Faculty, history, Tours. Bookmark the permalink.