A New Year in a New Place: Experiencing my own Culture in a Different Language

I am a Jew. Throughout my life, and especially as a college student, one of my strongest identifiers, both in my own eyes and the eyes of others, is my Jewish heritage and culture. My family shares a common narrative with many other North American Jews–my ancestors fled violence and persecution in Eastern Europe in the early 20th century, arrived in New York City, and within a single generation, the legacy of the shtetl (a Yiddish word to describe the poor villages in which Jews were made to live under the Russian Empire) was mostly overwritten, and my family became, more or less, a family of assimilated English-speaking Americans. Regardless, some of the religious and cultural practices remained strong in my family. Personally, I continue to celebrate the important Jewish holidays every year as my ancestors did. I fast on Yom Kippur (the Day of Atonement), attend occasional Shabbat services, and involve myself in Jewish life wherever and whenever I can. 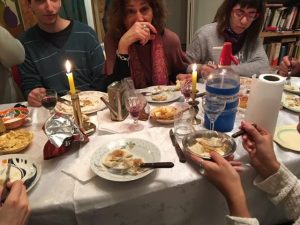 Because of the nature of the lunar calendar (and Jewish tradition), most of the important Jewish holidays fall in the…fall! As a result, for me, the months of September and October tend to be filled with tradition, reflection, and celebration, as well as spending significant time with family. So, naturally, I was completely thrown off when the Jewish holidays arrived not only while I was experiencing the Southern Hemisphere spring, but also while I was situated more than 5,000 miles from my family, in Argentina, in a country where the Jewish community was very different from the one I knew well. On top of all that, I had to observe the holidays not in English or Hebrew, but in Spanish! While I was lucky to be in a country with one of the largest observant Jewish populations outside of the United States and Israel, I was thoroughly confused and nervous to see how my cultural and religious practices would (literally) translate into the context of this completely unfamiliar culture. However, while initially I thought my being in South America for the Jewish holidays would be purely an inconvenience (I was hiking Iguazu Falls in 90 degree heat and humidity on Yom Kippur, which led to a substantial amount of dizziness and discomfort), it actually ended up providing an entirely new perspective for me, as well as an appreciation for the wide-reaching and persevering nature of my culture. 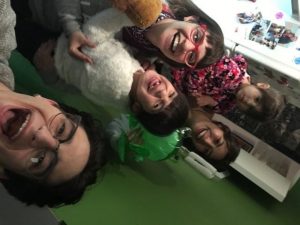 Specifically, it was the experience of celebrating Rosh HaShanah (the lunar New Year) with my host family that truly showed me the ability of my people to congregate and practice our religion and culture in any environment. My host sister’s father (who is no longer married to my host mother, but is still very close to my host family) is a practicing Jew, and comes from a long line of Polish and Russian Jews who emigrated to Argentina during the early to middle 20th century. His father, who was present at the dinner, was born in Poland, and fled ethno-religious persecution with his parents at a very young age. It was a story not too different from my own family’s story. Throughout the dinner, I helped them prepare vareniki, round challah, and manzana y miel (apples and honey). We said all the prayers my family/community says, albeit with a different kind of pronunciation pattern. We even ate the traditional foods that my family prepares, such as brisket, gefilte fish, and blintzes. The food was sweeter than how my family prepares it (as was most of the Jewish food in Argentina that I ate), but it was basically the same.

The thing that resonated with me the most about that dinner was the way with which all the different members of the family greeted each other. It was nearly exactly the same as how my family greets each other–loudly, sarcastically, and with a somewhat deprecating but not overly cruel remark regarding one or the other party’s appearance. The only glaring difference was that, instead of loud sarcastic Brooklyn Jewish yelling, I was listening to purely loud sarcastic porteño exclamations. 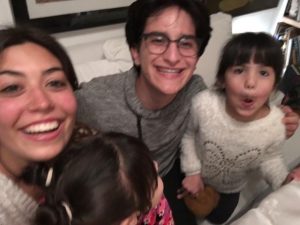 It was surreal to experience my own exuberant culture, performing the same religious rituals, in a different language. At the same time, it was profoundly comforting. As I sat in the backseat of my host family’s car after dinner, driving through the streets of Villa Crespo, attempting to speak in four different languages with my host sister’s older half sister, feeling present and safe and happy in the moment, I knew that the rest of the semester would be similar to that night: full of love, acceptance, and happiness, both as a temporary member of my host family, and as a Jew in Argentina.