Sport and Learning in Australian Culture

Hi there! My name is Sindi and I can’t believe it’s been a year since I studied abroad in Australia.

Looking back it is the greatest thing I have ever done in my time in college, and I am so grateful for all the memories I still have from my time abroad. My favorite memory is a class I took called Sport and Learning in Australian culture. This class gave me the opportunity to immerse myself into Australian culture and to meet other international students. I loved this class because it transformed life into a classroom, and made experience the main criteria for assessment. 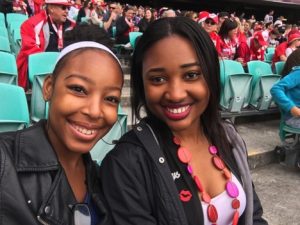 My most memorable game was the first one I attended: the Rugby game between the Rabbitohs and the Dragons. I remember arriving at the game, the night air crisp with the winter cold and grabbing some warm salty fries with a few friends before settling down to watch the game.

I was seated next to an elderly Australian man who was clutching a frothy beer in one hand while his other hand was balled in a fist as he yelled with a hoarse voice “let’s go bunnies!” throughout the game. Even though that night was particularly cold, the smell of fresh meat pies and beer wafted through the air and made the chilly night just a little easier to bare; and each time the Rabbitohs scored, the crowd erupted in applause and so did we as students of that class, as if somehow we shared in the victory of the Rabbitohs. Even though the team we were supporting lost the game, being in that crowd made me realize that sport remains one of the only ways to bring people from all walks of life together. Sports make people put all their differences aside for a while, and unite under a single shared objective, and I had the privilege of witnessing that first hand.

I’m eternally grateful for all the memories and experiences Australia gave me.