Would you believe in the 20 years I had lived before going to London, I never attended a concert before? Well, there was one when I was about 4, 5, or 6… basically too young to remember, which was a Bollywood concert my family was raved about going to way way back in the early 2000s. I on the other hand was too young, and didn’t get to have that surreal concert experience until the first concert I attended in London. Prior to going to London, I was extremely thrilled to hear that one of my favorite artists, Odunsi the Engine, was going to be holding a concert as part of his very first tour that would take place just a couple weeks after my arrival to London. Even after booking my digital ticket months in advance, right after I had just been accepted to study abroad at the University of Westminster, it still felt unreal that I would actually be overseas watching my favorite artist perform right in front of me in no time.

It was a ravishing experience being in a room full of people who loved this artist just as much as I did, and singing from the top of my lungs to each and every lyric with strangers I would’ve never had the chance to meet otherwise. Odunsi the Engine is still a new and growing artist, yet the venue was packed full of people from everywhere including all parts of London and broader. I was so excited to connect with all these people about my favorite artist, which because not too many people know about him, I rarely get the chance to ever do, especially with so many people at once! I got to chat with people about where they’re from, where I’m from, how we ended up here, and what an amazing artist Odunsi the Engine is. The experience exceeded my expectations, and also sparked an interest and longing in me to go to even more concerts, which I ended up doing again in London to see another favorite artist of mine, Smino – another concert that I recall as one of my best nights in London. On top of that, tickets were so affordable and the concert venues were never too far from me, the luxury of living in the middle of the city of London.

My experience adjusting abroad started off a little rough in the beginning, but going out to enjoy these concerts allowed me to get out there and engage with something I love, with people who share the same love, all the way across the Atlantic Ocean, which is something that has stuck with me even months later, post-abroad. 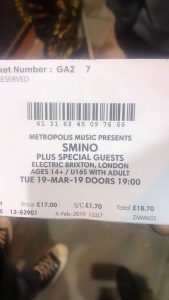