Many people tend to perceive the London First-Year Program as preventing one from making connections on campus by being abroad during the first semester of freshman year. However, I found that being a London first-year student helped me to become more involved in the Skidmore community and to find leadership positions on campus that I might not have otherwise. Don’t get me wrong – coming to Skidmore for the first time during the second semester of one’s freshman year is an untraditional and challenging way to begin one’s college career. However, being a London first-year student gave me so many opportunities to find my people and my place on campus. Throughout every step of my adjustment to and participation in life at Skidmore, being a London first-year student helped me to get involved in ways that relate to the program, as well as provided me with connections to branch out and to get involved in other ways on campus, such as joining the Polo team and becoming a “Big Sister” through Big Brothers Big Sisters at Skidmore. As a result, I can confidently say that the London First-Year Experience (LFYE) has continued to help me grow as a person and as a member of Skidmore’s community far beyond the first semester of college that I spent in London. 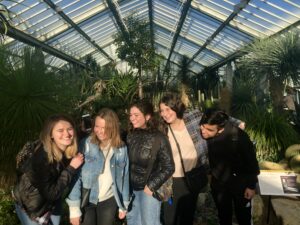 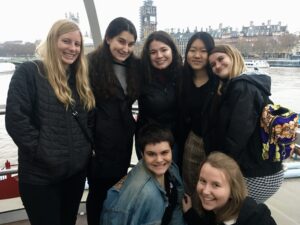 Some of my best friends and I from my LFYE program!

When I came back to campus after studying abroad in London, I was greeted and comforted by the community of current and prior London first-year students at Skidmore, as well as by the OCSE office staff. I was so passionate about my experiences and inspired by the incredible people that I was able to meet as a result of participating in the program, hence, I volunteered to be a spokesperson about my experiences to incoming freshmen at accepted students days. This was an outlet that I needed to be able to share my passion about my experiences studying abroad and to keep my connections with the LFYE community. I then began to work in the OCSE office the following summer and subsequent academic semesters, which served as the perfect way for me to have a job as a student while interacting with people who were just as enthusiastic about study abroad and/or a part of the LFYE community. I also became one of the Peer Mentors for the next group of London first-year students, which was not only my first experience as a student leader on campus, but it also allowed me to meet so many others and exposed me to all of the opportunities that exist on campus to be one. This experience was one of the key reasons that I became a Peer Health Educator (PHE) at Skidmore! I was and still am proud to have helped to support and guide the new generation of LFYE students, and to have welcomed them into the LFYE community of support at Skidmore. 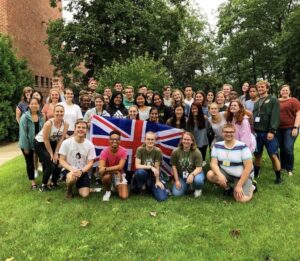 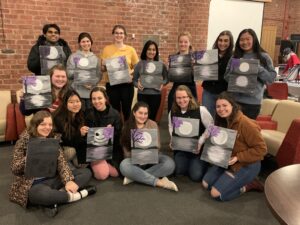 My mentees and I, right before they went to London, and during a Paint n’ Sip put on to welcome them back to campus!

I am now working as a PHE, who is not only spear-heading mental health initiatives targeted toward LFYE students from the Office of Health Promotions, but I am also helping out a current peer mentor with his mentees’ adjustment to campus after being unable to abroad in London this fall. I am hopeful to be able to keep my connections to Skidmore, to study abroad, and to the LFYE program by continuing to work in the OCSE office and being involved with the new groups of LFYE students, hopefully, either as a peer mentor again and/or as the IES program assistant in London in the future! I am forever thankful for my experiences as a London first-year student, both during my time in London and while a student at Skidmore, as they have helped to shape what I am passionate about, where my place is at Skidmore, and who my people are here.

In Returning to campus, Student Perspective