Thanks to the hard work of Melissa Green, Sondra Lipshutz, Jeremy Rosen, Matt Tatkow, and Associate Professor Robert Jones, Skidmore College now has a comprehensive atlas mapping the College’s 800 acres of land, including the 200 acres recently donated by Michael and Margaret Roohan, which was made in part as a tribute to the employees of the family business Granite & Marble Works, Inc. of Wilton.

Last summer, the team surveyed the College’s woodlands and created maps that included information on trails, surficial geology, bedrock types, points of interest, and history. Using Geographic Positioning Systems (GPS) and Arc Map (a mapping application) the team surveyed the largely overgrown and difficult terrain to provide a collection of maps for the Skidmore community.  “Overall, this collection of maps and other information on Skidmore’s many parcels opens the land to students and faculty for uses such as student-faculty research, as an outdoor classroom, and for club activities,” said Sondra Lipshutz ’13. Professor Bob Jones has provided a summary of four of the parcels that were surveyed and mapped in this project (found below). Click here to access the full Woodlands Atlas Report is available on Skidmore’s Sustainability webpage. 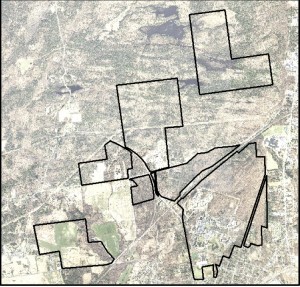 Skidmore College owns more than 1,000 acres of land, and only about 150 acres of that is used for academic, administrative, recreation and dormitory purposes.  Some of the remainder is used for soccer and baseball fields, however more than 800 acres consists of woodlands.  Parts of the woodland parcels are heavily overgrown and tic filled (although about 125 years ago they were open land or forests with trails).  About 700 acres consist of woodlands with usable trails running through them.  Using Geographic Information Systems (GIS) techniques each of these parcels were analyzed and described during the summer of 2012.

The Skidmore North Woods is the most familiar parcel to most members of the Skidmore and Saratoga Springs area communities.  The North Woods now comprise about 150 acres of hills, valleys and meandering trails.  It was once home to a lake that was used for canoeing, swimming and ice skating, but the lake was drained when the railroad tracks were laid in the late 1950’s.  The North Woods is used for many different and often conflicting purposes.  The major academic users of the North Woods are the biology and geosciences departments as well as the environmental studies program.  Faculty members in Studio Art, English, Archeology, and Religion have also made use of these woods for their classes.  ID 210 (the Introductory GIS class) explores the North Woods every semester.  The close proximity to academic buildings is the major reason for the large concentration of academic use in the North Woods.

The North Woods has been widely used for recreation for over a century for horse-drawn carriage rides, horseback riding, hiking, dog-walking, jogging or just getting close to nature.  The ease of access from campus and from the surrounding community has led to more intensive use of this parcel than of the others.  Four main trails have been marked since 2005 in order to help recreational users to find their way around and to reduce the amount of new trail creation which had been destroying habitats of smaller creatures and of plants.

Across North Broadway from the North Woods is a parcel of land which the summer study group came to call the Hillside parcel.  It is a long, narrow parcel that is literally on the side of a hill (the McGregor fault).  Some of its historic trails are fairly wide and easy to follow, however other historic trails are becoming heavily overgrown and even difficult to find.  A high fence, probably constructed a century ago, blocks two of the historic trails on the property and has led to some of the parcel returning to a more natural state.  This parcel is easily accessible from North Broadway but has very little foot traffic.

The Skidmore Stables mark the entrance to a roughly 200 acre parcel of land to the north, and has an old carriage trail loop near its entire perimeter.  This former carriage trail is about 10 feet wide in most places and takes less than one hour to hike.  This trail is unmarked and is crossed by several other smaller trails that make staying on the main trail something of a challenge without a map or a GPS unit.  There are two sections of the trail that have relatively steep climbs but each is only a few hundred feet long.  Along the main trail one can see the remains of stone walls built probably two centuries ago when much of this parcel was used for farming or grazing.  Along its main trail there are interesting geological formations and a series of streams and ponds with a beaver dam holding back one of them.  Another part of the trail crosses relatively low land that is actually under water during some years.  Lately this trail has been walkable for its entire length.  The biology and geosciences departments use this parcel for lab courses but on a much less regular basis than the North Woods.  The entrance to the Skidmore Stables is about a mile from the main campus (following Clinton Street to Daniels Road).  Skidmore has given permission (on a temporary basis) to individuals on non-motorized bicycles to use the western most part of this loop trail for access to biking trails further to the north.  Care must be taken when walking the main trail on this parcel because bikers and hikers sometimes unexpectedly encounter each other.

The northernmost 200-acre parcel was recently gifted to the college and is the most challenging to reach.  It takes more than 30 minutes from the stables to reach it and another 30 minutes to reach its eastern most point, which has come to be called the “Overlook”.  From the Overlook (160 feet above Maple Avenue), one can see the Green Mountains in Vermont more than 42 miles away.  The trail leading to the overlook is not marked and it is very easy to make a wrong turn.  The trail to the overlook is very rocky with some large outcroppings and steep drop-offs to either side of the trail, which runs along an east-west ridge between two ponds.  In fact, on this parcel there are a series of east-west ridges with deep valleys, ponds, streams or marshlands in between.  Needless to say traveling north-south within this parcel is a challenge.  The four ponds on this parcel are 100 to 200 feet wide (north-south) and thousands of feet in length (east-west) and were created by the melting of the glaciers thousands of years ago.  This parcel was used in the 19th and early 20th century as a wood source for fireplaces in the large estates in and around Saratoga Springs.  Through the mid 20th century it was a source of lumber for a large paper company, and the logging trails that they used are now deeply rutted paths.  These paths are challenges to hike due to their deep, often mud-filled, ruts.  This is a parcel on which it is easiest to get lost and should not be used unless going with someone who is familiar with its geography.

Each of the four major woodland parcels summarized here has its unique features.  Hillside is geologically interesting as you hike down the McGregor Fault.  The North Woods has its marked trails each of which is a very different experience.  Some of us think that the Orange Trail is the most interesting and varied, while the Red Trail is the easiest and shortest of them.  The Stables Trail has a definite Adirondack Mountain trail feel to it as you cross streams and encounter a small waterfall.  The Overlook Parcel is more than one-third wetland with several large ponds and is difficult trails to hike.  It is by far the most challenging to reach on foot due to its distance from roadways.