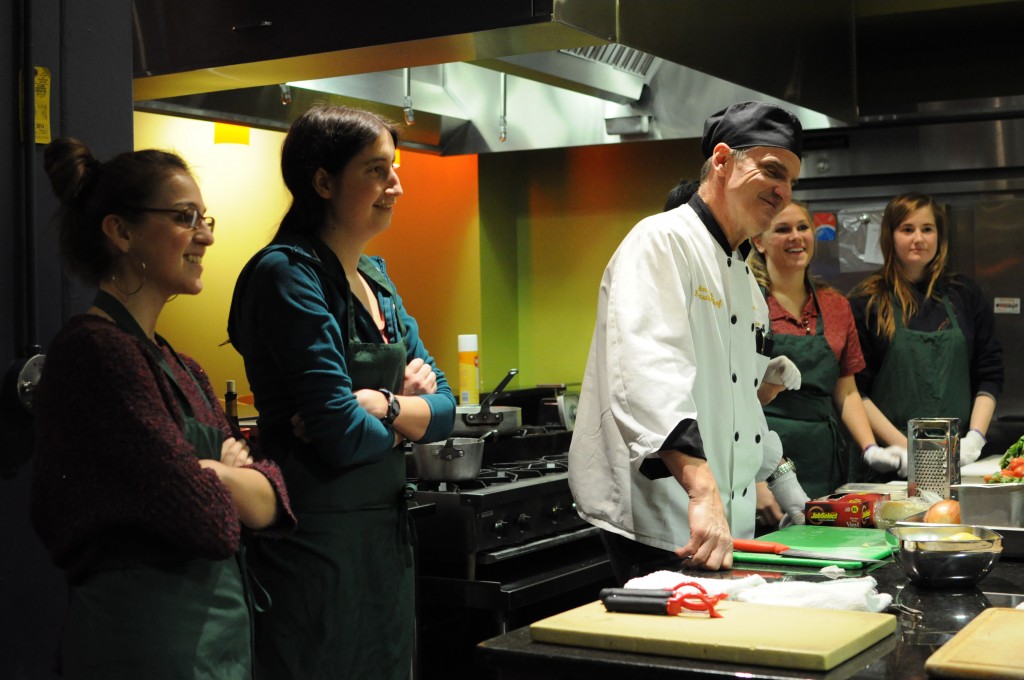 Skidmore Student Composting recently teamed up with the College’s Dining Services to offer roughly a dozen community members instruction in food preparation involving safety, skills, and food waste reduction. Composed of mainly students, the group prepared a risotto dish for the main meal with a fresh garden salad, and a fruit salad with hand-made whipped topping for dessert.

Jim Rose, executive chef, and Mark Miller, director of dining services, demonstrated basic food safety, preparation, and waste-reduction practices while sharing their knowledge of and enthusiasm for food. They led students, step-by-step, through the preparation of a complete meal.

The group learned that when making risotto, it is important to keep in mind time requirements and general meal planning. Students also followed a variety of steps and learned to use open-fire burners safely. Rose and Miller were on hand during the entire operation, providing insights as students completed various tasks.

While preparing red bell peppers for a salad, students were instructed safe use of knives and cutting boards, such as keeping fingertips curled away from the blade and placing wet towels below the cutting boards to keep them in place. They learned that slicing peppers vertically allowed them to remove inedible parts without wasting tasty portions of the pepper. Students also learned the benefits of using plastic cutting boards over wooden boards. Even smaller and finer cuts in wooden boards harbor bacteria, something that hard-plastic cutting boards will not allow. The same cuts can retain flavors or fragments of other foods that may not be suitable for other meals or consumers (such as meat flavors for other dishes, or vegan meals). Throughout the meal prep, participants added the inedible food scraps, such as melon skins, to a compost bin that was dumped later at the composting site near the Northwoods Parking Lot.

After the meals were complete, students sat down with their fellow community members and enjoyed an exceptionally tasty meal. Participants shared conversation and their interests in food, getting to know community members they don’t always have a chance to see.

Following such a positive response, Skidmore Composting and Dining Services is excited to host another Food Skills/Safety and Waste Reduction dinner, so keep your eyes peeled! Organizers may even consider potlucks and instructional dinners based in Northwoods Apartment housing using students’ kitchens.