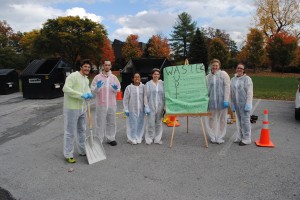 This fall Sustainable Skidmore conducted the second on-campus waste audit as a way to assess Skidmore’s progress in recycling and waste reduction. In 2013, the college transitioned to a new Zero-Sort Recycling program allowing all recyclable materials (paper, cardboard, plastics, glass, and metals) to be put in one bin, making recycling much easier for users.

Organized by the Sustainable Skidmore office, representatives from Casella, our waste hauler, a weeks worth of trash from two on-campus bins (one from Sussman apartment Village and one from the Williamson Sports Center) were sorted to see what percentage of “trash” was actually recyclable. This information will be used to create better signage and campaigns in the coming months for the Sustainability Office and the Sustainability Representatives (S-reps).

S-reps and student volunteers performed the audit by bravely sifting through the trash, and they did it with as smile. According to Sustainability Fellow Emily Davidson, “We have incredible students who are willing to literally sort through trash to help us determine the percentage of recyclables being thrown away, as well as what type of recyclables are thrown away most often.” Wearing light jumpsuits, protective glasses and gloves, waste and recyclables from Sussman Village and the Williamson Sports Center were sorted. The Sustainability Office and S-Reps will use this information to create better signage and educational campaigns in the coming months.

The audit gave students the opportunity to understand just how much material is recyclable, and learned more about the steps that can be taken to prevent recyclables being contaminated beyond the point of recovery. A reoccurring problem was paper and plastic bottles being too contaminated by liquids and food waste to be recycled.

The final tally showed that 40% of the Sports center trash was recyclable while only 20% of the Sussman apartments bin was recyclable. The results represent an improvement in the Sussman Village from 30% in the spring of 2014, and still an improvement in the Sports Center from 60% in 2013. Davidson noted, “We have more work to do in public places so that recycling becomes second nature, but we are happy with our improvements thus far.”

Diverting recyclable material from the landfill is not only important for Skidmore, but has significant global implications. Americans generate millions of tons of trash every year, most of which is sent to landfills. Although landfills include liner systems and other mechanisms to prevent contamination of the surrounding areas, there have been cases where safeguards fail and dangerous chemicals leach out of landfills. Operational failures aside, all landfills produce methane (CH4), a potent greenhouse gas that is four times as powerful as carbon dioxide (CO2). Recycling, reusing, composting and reducing the amount of waste created reduces waste going into landfills and limits the amount greenhouse gases being produced. Skidmore will continue to work toward reducing our waste stream and minimize our contribution to landfills by monitoring and improving upon our various waste reduction infinitives on campus.