The Charge Point station in Palamountain Parking Lot has 630 charge sessions in 2016. This spring semester a new station will be installed. As the community of electric vehicle users grows, the College anticipates installing additional stations that are conveniently located for users and highly visible to visitors. If you drive an EV, please email sustainability@skidmore.edu to join our EV list-serve for station updates and to connect with other users.

This fall, bike share users rode over 1,060 miles on BikeMore bikes. All BikeMore helmets, available in the Campus Safety Office, were updated with bicycle benefits stickers that allow users to get 10% off their purchase in many stores downtown. The bi-annual survey suggested that 87% of riders go downtown, and an average ride is about 2.5 miles.

North Broadway was painted with new bike lanes in November[1]. Saratoga’s Complete Streets, the city of Saratoga, and the Greenbelt Trail coordinated this project, which is one of many initiatives to make the city safer for cyclists and pedestrians.

By late summer 2017, Saratoga Springs will have its own bike share, as a part of the larger Capital Region Bike Share network. The Capital District Transportation Authority will launch a two-year program through Social Bicycle, and 300 bikes will be available at hubs in the four counties of the Capital District[2]. This project has been underway for nearly two years, and Skidmore students were directly involved in preliminary suitability studies for the bike share in Saratoga. The Management and Business Department hosts partnerships with local businesses and non-profits through the Skidmore-Saratoga Consulting Partnership, and in Spring 2016 a student team conducted surveys and research for the project[3].

These green transit initiatives are making the city more bike-able and walkable for Skidmore students and the entire Saratoga community. 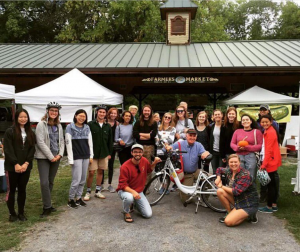 Our BikeMore Managers, Matt Bristol and Zia O’Neill, coordinated a ride  to the Farmer’s Market for students this fall. Students got to meet farmers and sample foods thanks to a gracious tour from Saratoga Food Tours.