21 Savage as an Impetus for Immigration Reform

If you’re like me, you were pretty shocked when you found out that Atlanta rapper 21 Savage was arrested by ICE. Perhaps this is the first time you’re hearing that 21 Savage was arrested by ICE. On Monday, February 3, 21 Savage, whose real name is Sheyaa Bin Abraham-Joseph, was detained by Immigration and Customs Enforcement following an unrelated traffic stop. A large part of 21’s public persona revolves around his Atlanta heritage, from the content of his music to his influences and collaborations. Nonetheless, it surprised me and plenty of others that he was able to be deported; many simply assumed he had been born and raised in Atlanta. 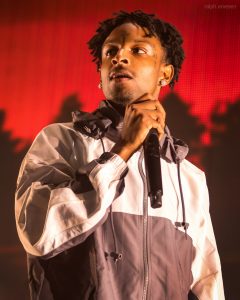 As it turns out, 21 was actually born in the Newham neighborhood of London, England. His parents, who are both British, separated when he was 12, and he moved with his mother to America, settling in Atlanta. The content of his music appears to be truthful in its autobiography, contrary to his lawyer’s statement that “his whole public persona is false.” Shortly after his immigration, he was in and out of DeKalb County public schools for gun related charges and eventually joined a Bloods-affiliated gang as teen. On his 21st birthday, he was shot six times and his brother was killed.

But that’s when 21 turned his life around. Collaborating on an EP with renowned ATL producer Metro Boomin, they released Savage Mode in 2016. He was on the cover of Fader, part of XXL’s “Freshman Class,” and signed to Epic Records. The next year he released his debut album, Issa Album, and my personal favorite, Without Warning, another collaborative album with Metro Boomin and Offset, one-third of the Migos. 2017 also saw 21 feature on Post Malone’s “Rockstar,” which topped the Billboard Hot 100.

But 21 goes beyond that in representing the American “rags-to-riches” zeitgeist. In March of last year, he launched the 21 Savage Bank Account Campaign, named after his hit song “Bank Account.” This initiative teaches essential money-managing skills to underserved youth. He came from a family that struggled with the management of money, and wished to convey the importance of financial prudence to kids. I think we can all agree that this is a much-needed skill that is not being taught in our public schools. He has also established initiatives to raise money for back-to-school supplies and Atlanta public school anti-bullying campaigns.

Did 21 Savage make mistakes in his youth? Of course. Has he corrected for his past transgressions? Absolutely. Many see his lyrics, which center largely upon guns, gangs, and other illegal activity, as promotion of a violent lifestyle. These critics miss the point. This was 21’s entire livelihood for a large portion of his life, so what other experiences did he have to draw from when creating his art? And since he had been indoctrinated in such a lifestyle from when he first came to the country, he wasn’t really equipped with the tools or role models to escape the gang life. However, he found success in the hip hop industry which has allowed him to become the role model to equip youth in a similar situation that he was with the tools to succeed.

21 Savage is the kind of immigrant that we should want to embrace in this country. He was but a minor when his visa expired and became inculcated in gang activity. His violent past in inexcusable, but understandable given the circumstances. He has apologized for his regrettable behavior, and has taken actions to make sure today’s youths in Atlanta don’t follow the same path that he did as a child. His detainment by ICE represents a larger problem with immigration policy in this country. First is the fact that he came here as a child. This point is really negotiable as far as I’m concerned; minors aren’t held responsible for their parents’ actions in any other Western country.

More importantly, it seems as if American conservatives wish for a more stringent immigration policy than American leftists. They advocate for a more discriminatory policy, in which only the “best of the best” of potential immigrants are allowed in. So why is 21 being deported? He is a successful musician that consistently reciprocates to his community in meaningful ways. Why hasn’t this been an issue in the numerous felony and misdemeanor charges that he racked up prior to his international fame? The United States has an obligation to ensure that its immigrants integrate into American society. 21 didn’t integrate well and still managed to find a way out of violent life and affect a positive change in the community. So imagine what our immigrants could do if they were paid attention to.

WSPN is Protected by Akismet | Powered by WordPress